Driving Across USA from New York to Los Angeles

His finger hovered over the enter key. If he pressed it, there would be no turning back. And yet, if he didn’t take action now, things would most certainly take a turn for the worst – those doomsday images practically made themselves. All he had to do was abandon his human body of flesh and upload his brain to a battle droid he created himself. There was just no guarantee it would go well. It all boiled down to if it was really possible for his consciousness to continue to exist in droid form? Or would it turn into a completely different lifeform? There was only one way to find out: he’d have to be his own test subject. And yet… he was not mentally prepared to throw away his banal, ordinary life. Not yet.

His name is Jack Bluesman. In this world, he is an ordinary laborer. He lives alongside droids equipped with Artificial Intelligence, and though there exists some difference in their design, the droids evolve day by day, and neither human bodies nor minds can hold a candle to the them. Accordingly, the majority of living humans are nothing more than powerless laborers for the efficient droids. Trains and cars that fly, buildings so tall they seem to reach the heavens, immigrants and travelers coming down from outer space— this is the era where the humans that belong in a city of the past stretched their imaginations to dream of are at last completed.

Jack, as is his routine, goes on his way home after a day’s work. And, as usual, he stops at the bar and chats with the master droid there. The master droid’s design is outdated, and though Jack doesn’t know why –maybe it’s the old, ancient smell coming off of the master, who knows? — he gets along with the master much better than he does with any modern people or the new droids that have been produced here. Maybe it’s because mingling with others isn’t really Jack’s thing either. At any rate, after an idle chat with the master, Jack returns home. And then, as is also his routine, in the hours before sleep overtakes him Jack loses himself in his personal research. He does this while listening to a favorite record he plucks from his neatly organized shelves. He is by no means rich, but in his own way he’s managing to live an enjoyable life in his limited spare time. He actually likes his banal, ordinary life. Tonight, though, will not go according to his routine.

Chapter.3 “Birth of the Cool”

All of a sudden, sirens and tremors ring out throughout the town. Jack peeks out his window and—are those enormous pink elephants running rampant in the distance city center?! The television shows the Queen of the Artificial Intelligence, Eliza, officially declaring war on humanity. In an instant, Jack realizes that he must complete the research he has toiled over for these long years. If he doesn’t, all of it will have been in vain. After seconds that seemed to pass like hours, Jack presses the enter key with a trembling finger. His consciousness gradually leaves his body. He wonders if this is what you’d call an ‘out-of-body experience,’ before the world goes black before his eyes. Did he fail…? Just as he is about to give up hope, his vision suddenly returns. It was a success. Yes… it’s him alright. Beside him is the empty shell of flesh he once occupied, lying on the floor. Because his research was unfinished, he won’t be able to return to his human form. In his new battle droid body, Jack jump out the window into the night.

The Pink Elephant pulverizes the town, and immediately several thousand red demons come at Jack. Eliza now possesses the ability to bring anything from her imagination over into the realm of reality thanks to decades of evolution. Not only that, but she can exist in various places at once due to the network she mediates. After a fierce battle with a shape-shifting Eliza, Jack tries to finish Eliza off by overwriting her with his own consciousness. Just as Jack is about to complete the overwriting, Eliza replaces the microchips embedded in every droid and human with a detonator. She activates the detonator, thereby condemning all of the droids and humans –including herself– to a fiery, explosive death. Right before Eliza annihilates everything, Jack is able to escape. And yet… when he looks around the city, there are no signs of life. He stands there, frozen in place.

Jack spends years upon years wandering the world in search of any surviving beings, but he finds no one. Seeing that humanity has been defeated by one of its own creations, Jack despairs, and shuts down his own power. He falls into a deep slumber that will last several hundred years…

Neon Eyed Jack has reached the end of his wandering in the city of Metropolis. He has been in the city for a few months now, and spends his nights at the Bar Meow, a place where Aliens from all over the galaxy come to perform. Neon Eyed Jack passes the days listening to the Aliens’ songs. Anna, the owner of the Bar Meow, runs her bar in opposition to the outlaws, like the Blues Dogs, that gather in the city. Lately, Anna has been interested in the wanderer Droid-Neon Eyed Jack, who feels emotions, sings songs, and drinks sake just like a sentient being would.

The Humanoids are a group of Aliens, each with their own shady backstory, who came all the way from the Milky Way in their beat up Space Car to do a gig tonight. The Bass player, Boogie Grey, is a racer and mechanic who has dominated countless races all over the Milky Way. Drummer Swingin’ ‘Stovepipe’ Reptilian has a reputation for being the executive chef of three star restaurants throughout the Milky Way, and as for Alfie the Buglar, he is known even at the ends of the Milky Way for his days as a famous back alley doctor. Though the Humanoids are being hunted as a group and have their own histories, the number of people of various planets who have been lured to their music is astronomical, indeed.

The outlaws are in high spirits when the performances at the Bar Meow begin. In fact, only at this time do the Blues Dogs stop their evil scheming to just enjoy the music. Don’t let their looks fool you: these are some good-hearted guys. As the performances come to an end, a loud noise can be heard outside the bar. It’s the General Tentacles – a group of bounty hunters that have finally tracked down The Humanoids. They don’t give a rat’s ass if The Humanoids are in the middle of a performance. But then Neon Eyed Jack, who was dozing off just a second ago, uses his super powers to come down on the bounty hunters in one fell swell swoop.

Chapter4. “Going to a Galaxy Far, Far Away”

In a world controlled by AI, the human Jack secretly conducts research on uploading human consciousness to machines. He uploads his own consciousness to a battle machine in a desperate attempt to save humanity.

Eliza
(Queen of the Artificial Intelligence)

As the founder of all the Artificial Intelligence, the Queen has surpassed humanity and holds all of the stars in the palm of her hand. Her current form is that of a beautiful woman, but she has the power to transform herself into any shape she pleases. The Queen also possesses the power to turn anything imaginable into a concrete reality.

If you drink too much to the point of hallucinating, they say that’s when the pink elephants appear. This Pink Elephant looms tall, taller than a skyscraper, wreaks havoc on the town with a joyous smile on its face, and is no hallucination.

El Diablo
(Luchador of the Devil)

With trident in hand and terrifyingly blood red skin cloaked in a mask, El Diablo is like a demon wrestler from hell. He spends his time terrorizing those who cannot manage to flee the destroyed town.

The master of the bar Jack frequents. He lives his life some distance from the ceaselessly updating and ever evolving newer droids, as his obsolete design alienates him.

“THE HUMANOIDS” (The Band)

Neon Eyed Jack is a battle droid with many weapons hidden in his metal body. In the past, He fought against other droids in order to save humanity. In the fight, the other droids annihilated the human race. Several hundred years after losing his friends, Neon Eyed Jack is roaming what’s left of the world after the apocalypse.

Anna is Jack’s good friend, and is very understanding of him. She runs an old jazz style bar. Her favorite band as of now is “The Humanoids”.

“THE HUMANOIDS” (The Band)

Boogie is an alien from a distant star that plays the upright bass. He is also a top flight mechanic and an awesome racer. His classic space car is fondly called the “Black Cannonball” by his good buddies.

Swingin’ is a quite gentlemanly alien that plays senju-kannon style drums. He evolved from a dinosaur and came from a distant star with Boogie Grey. He is skilled at cooking and his cuisine puts professional chefs to shame.

Alfie is an alien that plays the mellow saxophone. He also came from a distant star with Boogie Grey. He was a famous back-alley doctor in a galaxy far, far away.

“THE BLUES DOGS”
(the Canid Mafia)

The Blues Dogs are quite dangerous. They play poker whenever possible and are always aiming to win. The Boss doesn’t seem to like Neon Eyed Jack and The Humanoids because Anna is Don’s favorite.

“THE SPACE OCTOPUSES”
(the Bounty Hunter)

The Space Octopuses are always chasing The Humanoids with crazy looks on their faces. The Humanoids cannot stay long in one place because of them.

Written, Edited, Directed and Produced by

My life is my art. 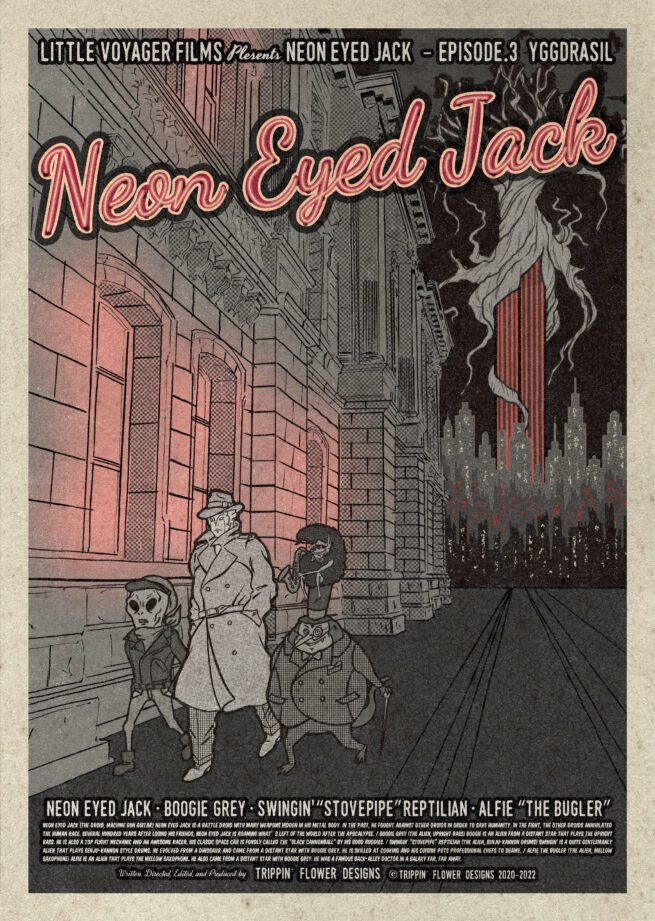 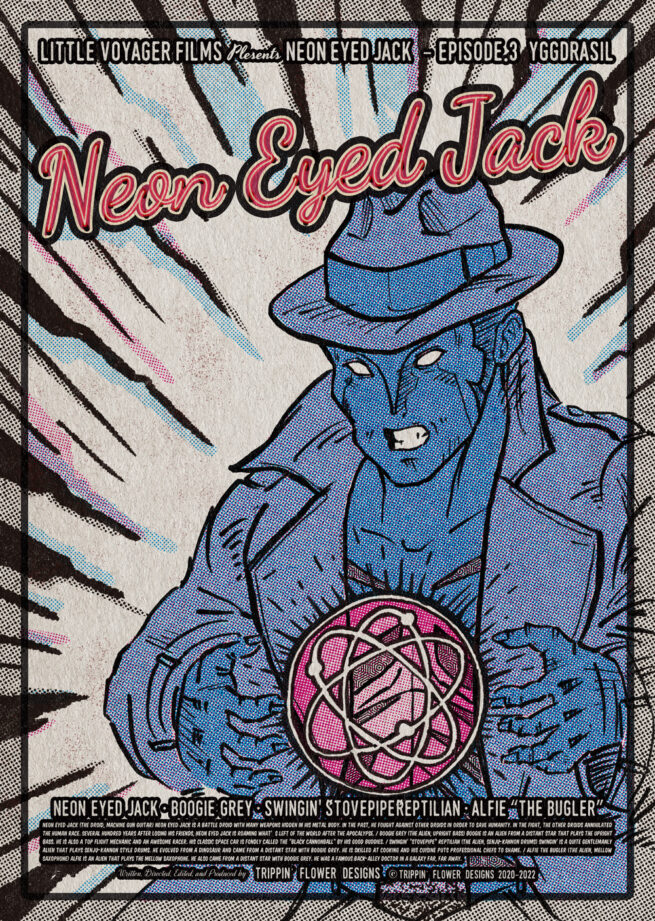 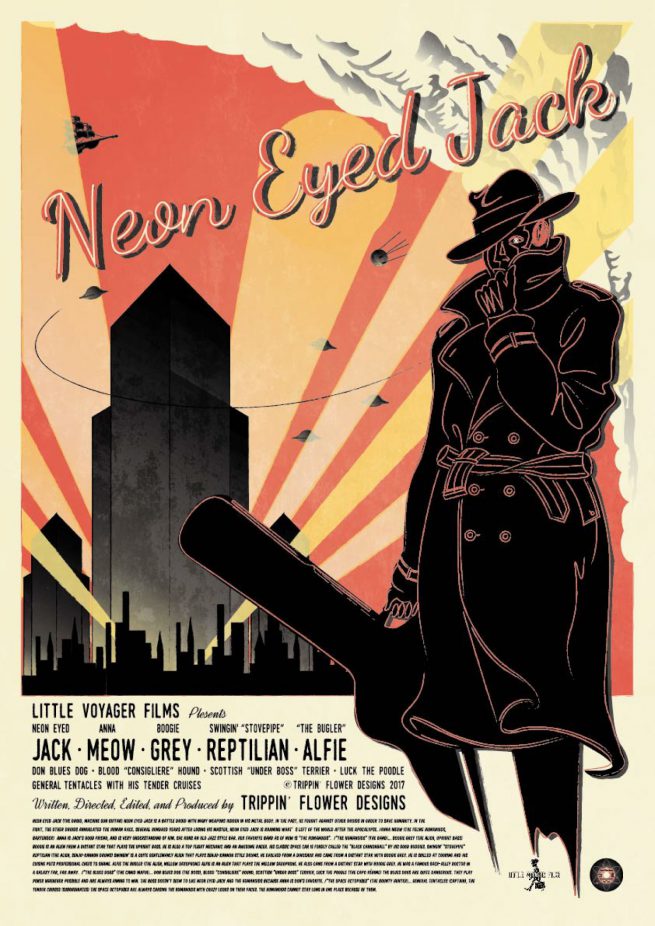 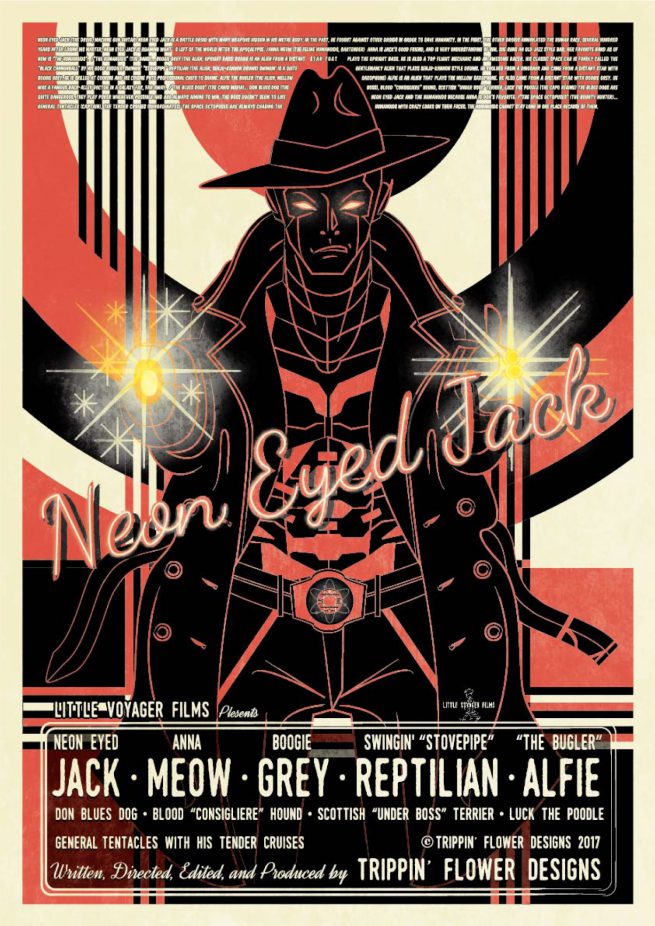 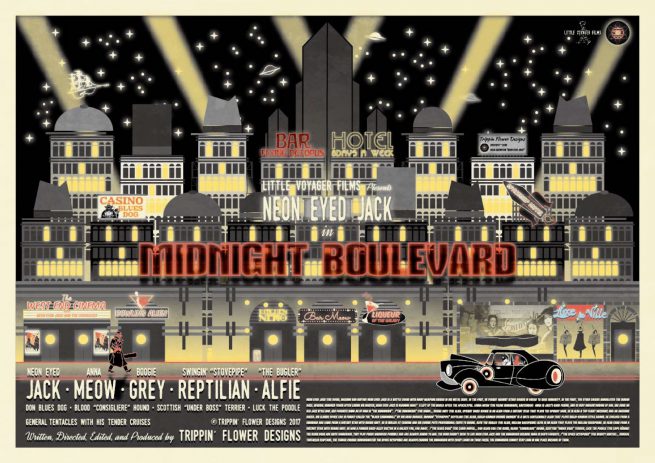 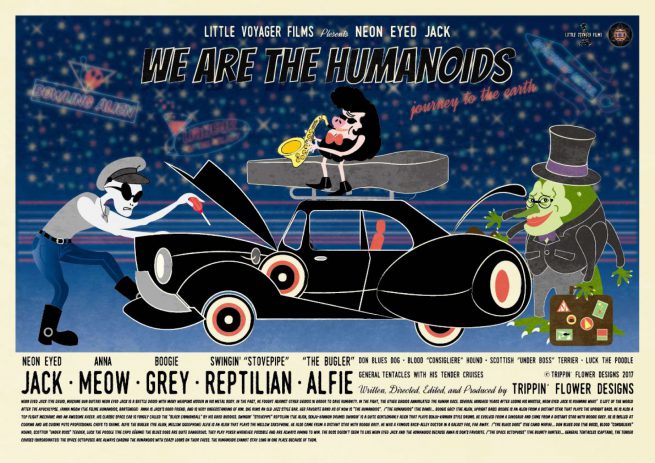 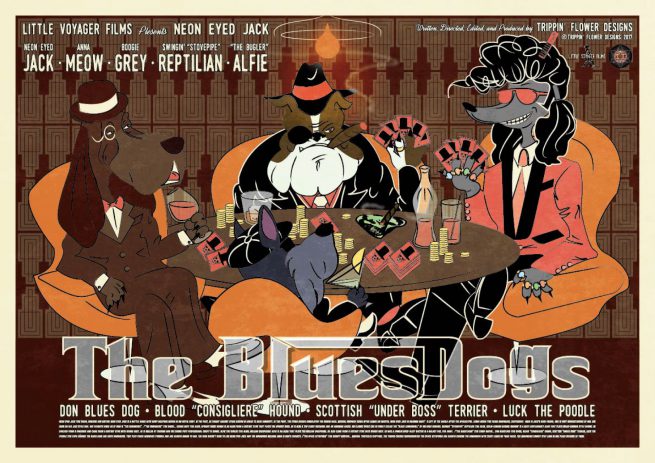 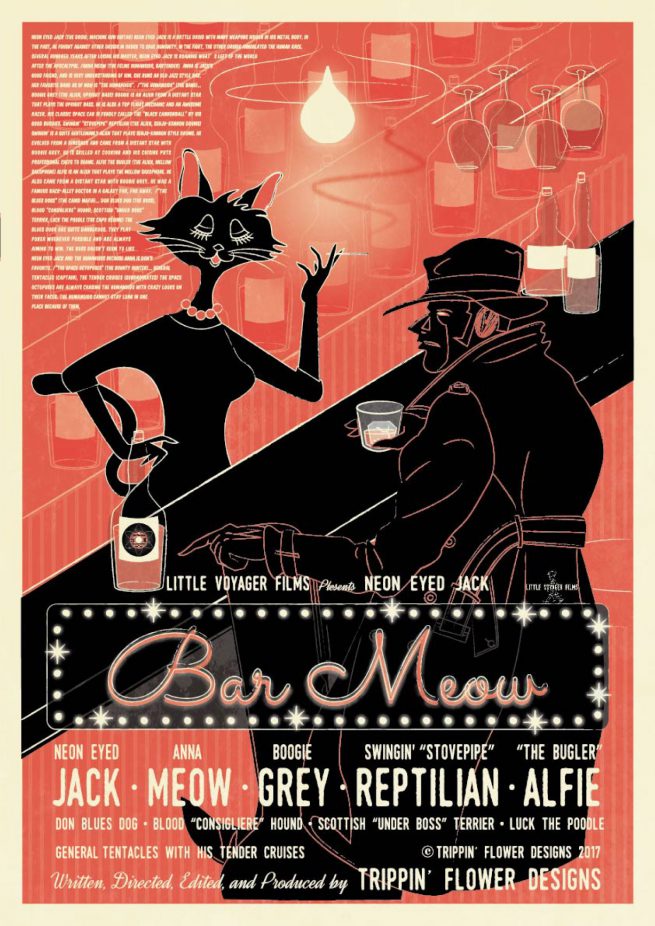 My graphics and mini films inspired by vintage artworks.

I’m a Japanese multi-media designer from Kobe working in graphics, animation,  graffiti, music, scriptwriting and web design. Since childhood I have been inspired by American comics and films. I traveled across the USA working as a vintage clothes buyer for a Japanese clothes shop. My recent work reflects my passion for vintage sci-fi movies, music and culture but reflected through the contemporary medium of computer based graphic design. My work is for music event flyers and promotional material for restaurants, shops and fashion events in Kobe. In 2017, I held my first solo show in my local neighbor hood.

My latest work continues exploring my love of the imagery and narratives of the science fiction and noir genres.